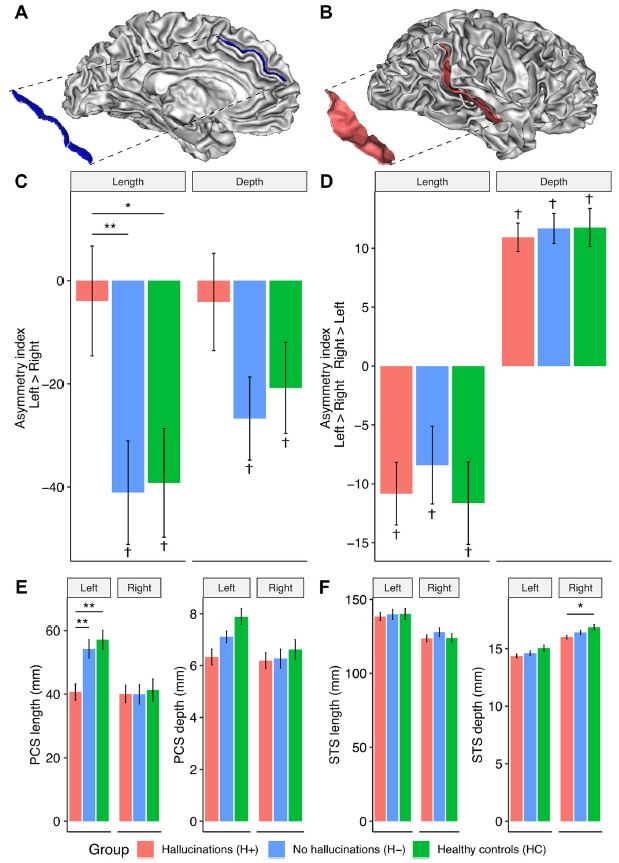 All perception is a construction of the brain from sensory input. Our first perceptions begin during gestation, making fetal brain development fundamental to how we experience a diverse world. Hallucinations are percepts without origin in physical reality that occur in health and disease. Despite longstanding research on the brain structures supporting hallucinations and on perinatal contributions to the pathophysiology of schizophrenia, what links these two distinct lines of research remains unclear. Sulcal patterns derived from structural magnetic resonance (MR) images can provide a proxy in adulthood for early brain development. We studied two independent datasets of patients with schizophrenia who underwent clinical assessment and 3T MR imaging from the United Kingdom and Shanghai, China (n = 181 combined) and 63 healthy controls from Shanghai. Participants were stratified into those with (n = 79 UK; n = 22 Shanghai) and without (n = 43 UK; n = 37 Shanghai) hallucinations from the PANSS P3 scores for hallucinatory behaviour. We quantified the length, depth, and asymmetry indices of the paracingulate and superior temporal sulci (PCS, STS), which have previously been associated with hallucinations in schizophrenia, and constructed cortical folding covariance matrices organized by large-scale functional networks. In both ethnic groups, we demonstrated a significantly shorter left PCS in patients with hallucinations compared to those without, and to healthy controls. Reduced PCS length and STS depth corresponded to focal deviations in their geometry and to significantly increased covariance within and between areas of the salience and auditory networks. The discovery of neurodevelopmental alterations contributing to hallucinations establishes testable models for these enigmatic, sometimes highly distressing, perceptions and provides mechanistic insight into the pathological consequences of prenatal origins.