The goal of the IPNP is to conduct leading-edge basic and translational research in psychiatry and neuroscience. For this purpose, the IPNP brings together cutting-edge experimental techniques and advanced methodologies to reach a mechanistic understanding of biological processes in the healthy brain and in neurological and psychiatric-related diseases.

The teams address projects in and be assigned to the following scientific domains:

The unit is structured based on:

-and the following cross-cutting domains:

The GRs of the IPNP

GR (Groupe de Réflexion) or Reflection Group is intended to be a Think Thank aka Club of experts brought together to develop ideas on a particular subject and make suggestions for action. At IPNP, GRs are intellectual and creative platforms of our institute, where science gets incubated. They are open to any member of the unit who wants to know more, share data, know-how, ideas or just listen to what is going on in the particular field.

GRs at IPNP are bringing together researchers (students, postdoc, researchers, technicians) in common scientific, medical and/or technical interests. Discussions can be informal or formal, depending on the will of participants. They should involve several teams. Outcomes of GRs may result in common grant applications, identification of a technical need for the institute,
building of a symposium or proposal for a new workshop. GR are free to invite people outside the unit for a seminar or discussion. GRs are the perfect forum to be actively implicated in the scientific life of the unit.

These seven GRs were built during the process of the creation of the new institute and have greatly accelerated and strengthened the links between the teams. However, the number and topics of GR are not fixed and new GRs could be built upon request.

The first success of the GRs :

The GRs were already very active and implicated in the set-up of the institute in which new and historical teams worked together and successfully obtained important grants such as Leducq Fondation, DIM Cerveau et Pensée and DIM Elicit.

Please download & complete the Donation Form and send it with your check payable to the “INSERM” to the following address:

Please note that all donations are tax deductible. We will send you a fiscal receipt as soon as we receive your donation.

Should you have any questions or require more information, please e-mail us

Your generosity is very much appreciated! 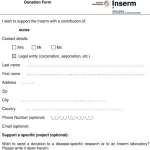 The Neuropole of research of Ile-de-France area (NeRF) includes whole the institutions and establishments involved in neuroscience research in Ile de France.

Created at the instigation of the Ile de France Region and led by Inserm, it took the form of SIG (Scientific Interest Group) in 2007. The NeRF aims to coordinate actions and research in the field of neuroscience, in close interaction with the ENP which provides it with administrative support. The ISG is headed by an executive board chaired by Philippe Vernier. The NeRF currently has at its disposal the resources it is allocated by the Region Ile de France.

His actions take the form of investment support (equipment and property), of  doctoral and post-doctoral allowances  and of support to the organization of symposia. Researches in neuroscience are carried out in several universities, institutes, hospitals and research centers, in laboratories that are usually dependent upon one or several national institutions, INSERM, CNRS and CEA.

Although these structures are involved in multiple levels, until the establishment of Neuropole, there was not  a real structuring of the field at the regional level.

A better understanding of forces and existing projects by all partners, and a real  consultation must allow: - the common definition of priorities and targets - the coordination of projects and funding applications - the implementation of joint actions - the development of technical platforms of common interest.